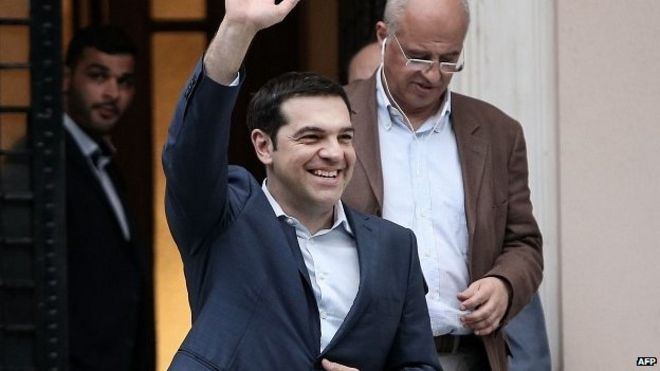 Stock markets have risen on the hope that a deal may finally be agreed between Greece and its creditors, after Athens submitted fresh proposals to try and avoid defaulting on its debts.

If a deal is not agreed, Greece risks defaulting on a €1.6bn (£1.1bn) loan repayment due at the end of June.

The proposals submitted by Athens have been received positively by its creditors – the International Monetary Fund, the European Central Bank and the European Commission (EC) – and by its eurozone partners.

“I see the work that has been done,” said French Finance Minister Michel Sapin. “It is quality work.”

He added: “A deal requires both sides to evolve. This work is underway and is being undertaken in good conditions.”

Earlier, a representative of the EC said the proposals represented a “good basis for progress”.

Investors took heart from such comments, pushing markets higher in early trading, with the Athens Stock Exchange jumping more than 7%.

“The most likely outcome, with a 75% probability, is a deal,” said Credit Suisse analysts in a note.

However, they warned that any deal would probably only be agreed late in the day.

“An unfortunate but predictable feature of European crisis decision-making is that such deals are only ever made at the last minute, ‘at the edge of the abyss’,” they said.

Greece’s creditors are insisting that Athens agrees to implement far-reaching economic reforms before it unlocks €7.2bn of bailout funds.

The country’s Syriza government has so far been unwilling to introduce such reforms. The outcome of Monday’s talks will depend on whether Athens’ latest proposals are deemed as an acceptable compromise.