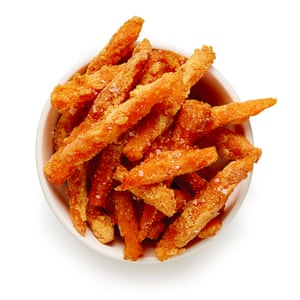 Until recently, I was suspicious of sweet potato fries as a concept: they seemed a misguided attempt to make chips healthy, with recipes that sang the praises of “non-starchy carbs” inevitably turning out sadly soggy results.

Frankly, five-a-day points aren’t one of the things I look for in a fish supper – that’s what mushy peas were invented for, surely. Then, while travelling in the Caribbean, I had a revelation: crisp sweet potato fries that made a virtue of the tuber’s natural sugars to give a deliciously caramelised result. They weren’t trying to be potato chips – which is fortunate, because their strong flavour and dense, creamy texture is never going to fool anyone – but this time, they were just as delicious.

Having failed to charm the secret out of staff, I turned to the internet, only to find a litany of threads with plaintive titles such as “Why didn’t my sweet potato fries get crispy?” and disgruntled comments underneath “addictive” recipes from usually reputable sources along the lines of, “I’ve cooked this four times and have never managed to get them crispy.” Clearly, this was going to be harder than it looked. So what is the secret to perfect sweet potato fries?

Some recipes specify there’s no need to peel, but, though generally a fan of the lazy approach, here I think a little work pays off: the skin makes the fries taste like baked potato wedges rather than chips. 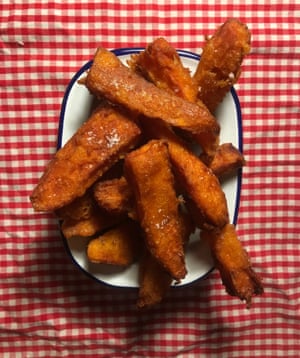 Cook’s Illustrated magazine cautions that “the typical sweet potato fry is cut thin, which means too little creamy sweet potato interior”, and I’m inclined to agree: much as I love french fries, the sweet potato has a tendency to dry out if prepared like this. Instead, make a virtue of its dense texture by cutting them into wedges, which will allow the interior to remain fudgy while the exterior crisps up. 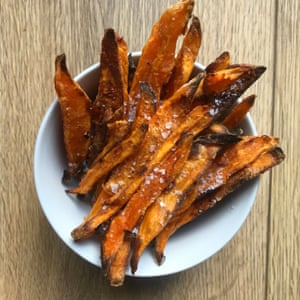 Sweet potatoes do have a relatively low starch content in comparison with the ordinary kind, but, just as when cooking rice, it’s important to get rid of as much of that as possible before cooking, because it will turn into sugar, which burns at high temperatures – some, such as Rebecca Lindamood of the Foodie With Family blog, reckon that excess starch stops the fries getting crisp – though rinsing, as with rice, should do the trick; there’s no need to soak them for hours first. 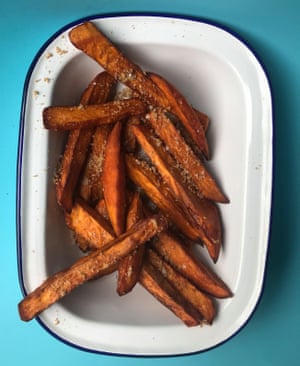 Cook’s Illustrated and The Joy of Cooking both pre-cook their wedges first, which makes sense from my experience of ordinary chips – and means that thicker-cut wedges will cook through before the sugars on the outside burn. The former adds some bicarbonate of soda to the water, which makes the outside of their chips a bit “tacky”… which will prove useful in the next step. Frankly, their recipe is just about perfect, so I’ve stolen their method. Thanks, guys.